It was April 3rd, 2019 at 11:23 pm and I was in our bed. The thoughts of this past year passed through my head like slaps. The thoughts of what I went through as a chef all of the good and the bad, all of the cooks I had taught my techniques to and all of the cooks and chefs that had taken their time to teach me theirs. I laid there watching Grey’s Anatomy thinking about how lucky I am to be where I am today but yet still feeling so much anger. I kept thinking about how I used to take kickboxing classes and how one of the trainers used to tell me my right hook came naturally to me. I was thinking about the first time my boyfriend and I took our child to go bowling and how he saw how good I was at it. I thought about the family in the lane next to us that shared their pizza with her even though she had just had dinner with us but was never able to turn down food. I thought about how I used to go to the batting cages when I was upset and hit the ball perfectly back at the machine and how my dad had seen that when I was actually on a softball team and his eyes lit up. I thought about the first time I had seared scallops perfectly and feeling that smile, that rush of that feeling of I can do this. The thoughts of being told by so many people early in my career that I would never amount to anything because I was too nice. I remember picturing the chef of my senior semester every single time I got a raise or a kudos because he was my biggest nay-sayer. I thought about all of those cigarettes I smoked by myself outside of whatever restaraunt I was working because I had felt so guilty about missing whatever family function or holiday it was that I was working, again. All of the times I had to laugh off being groped or made to feel that I was less because I was a female in the kitchen. That feeling of walking into a new kitchen not knowing where anything is and the feeling of accomplishment when you finally realize where the bowls and pots had been. That first breathe right after a huge rush you thought you were never going to see the end of or be able to pull through, and that thought of I did it. All the times I would call my best friend to tell her about the new job or position I had gotten and basically just saying holy shit I’m doing this! The first day of being pastry chef. The first day of being sous chef. The first day of being the chef. The first day of starting all the way back at the beginning to prove myself all over again. The first second of being burned and the fifth hour after things started to set in and I realized I was never going to be a chef again. The first time I was all by myelf after I was burned and the thoughts. I worked for fifteen years and made a name for myself and missed things and lost things and I always wanted to be a wife, a mom and a chef.  I never planned anything but that. I planned on being that mom that was able to bring her kids to her kitchen and show them all the dishes I created and they would sit in my restaraunt in awe thinking my mom is a fucking chef hero! But, that is not what is going to happen. AND I AM SO FUCKING ANGRY I WANT TO PUNCH SOMETHING BUT I CANT BECAUSE I COULD DAMAGE MY HAND. Do you know what it is like to end your career that you worked half of your life pushing for and showing people they were wrong in thinking you wouldn’t succeed. Do you know what it’s like to know that your plan isn’t your plan anymore and that people tell you that it could have been worse. DO YOU KNOW WHAT ITS LIKE TO BE TOLD THAT IT COULD HAVE BEEN WORSE. fuck you if you have ever told that to me, or anyone that has dealt with a trauma. For those people that said they were my friend but were no where to be found when I was at my worst. To those people that were actually there and understanding and loving, I hope you never felt like I spewed my feelings all over you too much. I apprecite you being there for my breakdowns and my ups. To my best friend constantly in texting, facetime and phone call converstaions with me. To my cousin who never told me it could have been worse and has been a pilar in my recovery.  And thank you to the love of my life for being there for me every single step of the way and for listening to me last night and not making me feel crazy for saying that I miss punching things or bowling or swinging a bat and that my kids will never know that I was a chef and just being there. Tomorrow is eleven months. I keep asking myself what it means to be at a year after being burned. And I don’t know. And that has to be ok. 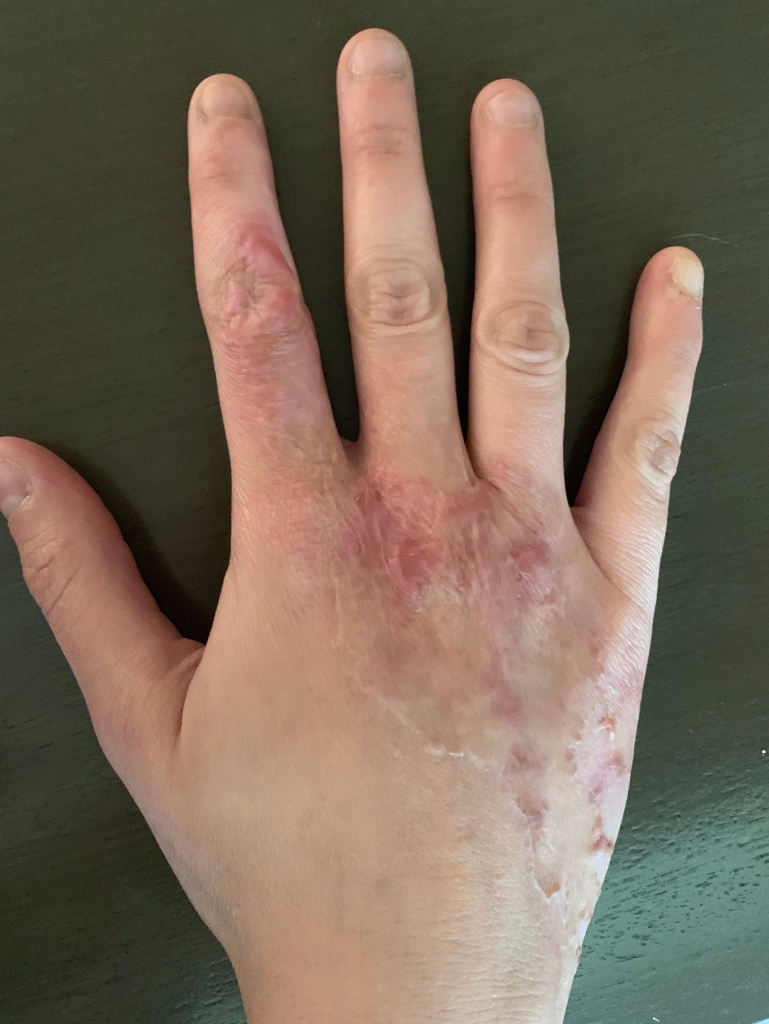 life is life View all posts by nicholethewhat

3 thoughts on “Nichole the… Present.”